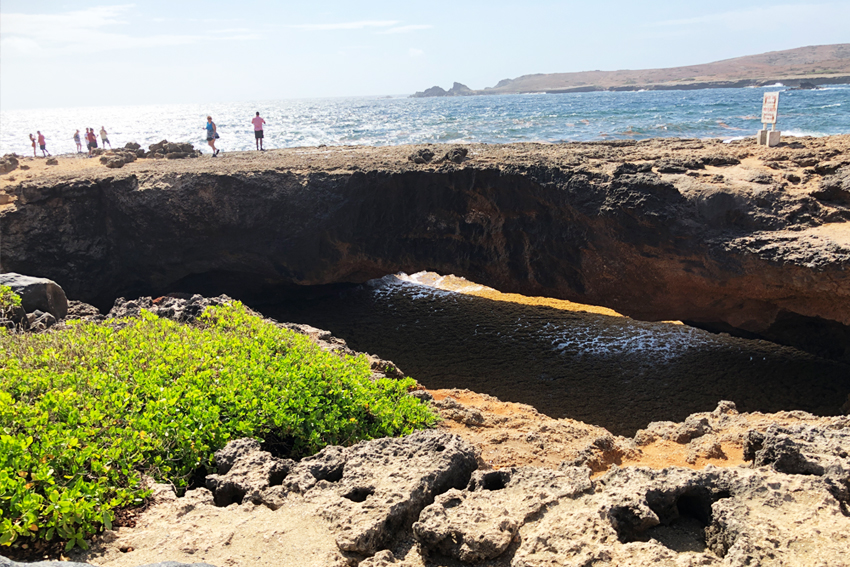 One of Aruba’s assets is the differentiation in nature and landscape. Where the East side of the island is covered with rocks, the West side is all about the white sand and Divi trees! Time to show you around at the East side with a bunch of pictures of the natural bridge. And a bit of history about it too of course…

History of the natural bridge

Halfway at the East side of the island you will find the largest natural bridge of the Caribbean. Or at least the remains of it after it collapsed by the force of a storm in 2005. Years of erosion from the sea has carved its way through coral rock. It formed the largest bridge in his kind at the Caribbean. With a length of 100 feet from which 25 feet over the sea, it was the largest of its kind in the Caribbean. The remains of the bridge still exist. And it is pretty impressive! Lucky for us, their is still a smaller natural bridge. Which is called the Baby Bridge. Imagine how the larger one was!

The whole area is definitely a visit more than worth.

Do you want a souvenir or something to drink? At the parking spot there is a shop where you can buy something to eat and/or to drink. They even sell something to take home as part of your memories.

By shopping local, even on this spots, you support the local community and local people in their living.